When I first bought BEI, many people asked to me, “how much did you pay for that Yorkie Terrier?” Considering that he’s a guaranteed purebred that I got from one of the famous Italian Yorkie Terrier breeders in Italy, the first thing that came to people’s mind was that I must have spent hundreds of Euro to get that dog. 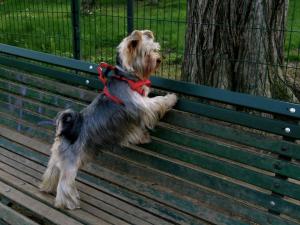 Well,honestly, had I bought him from when he was a pup of 2 months, I would have paid between 800-1200 € (the prices that this breeder gives when she sells her Yorkies, depending on the weight, the smaller the more expensive it would be).However, what was surprising them was when I told them, “Nope, I paid only 100€ plus she gave me his harness, leash, and coat plus some of his food for adapting with the new food”. They thought, “How could it be, you said he came from a famous Italian breeder”.

So then they had another question, “Is he sick? Don’t you think that he might be sick that she had to sell that cheap?” But the fact that now I have already had him for 7 months has shown that he’s perfectly healthy. Of course I was worried about that too, but then I think, “Why would a famous breeder want to ruin her reputation?”

The reason of why she sold BEI was simply because she has already got twenty Yorkies that will keep “producing” puppies for her and that BEI grew out of Yorkie Exhibition standard, less than 4 Kgs. He weighs 5 Kgs so that was how I got lucky.

She named him BEI, which is the abbreviation of Bello E Impossibile (Impossibly Beautiful) as she was preparing him for exhibition and didn’t expect he would grow that much. She told me I could have changed the name if I had wanted the change but at the end I decided not to as the name is very unique and beautiful.

I was also lucky because I was the first who sent her the message that I was interested. She told me that there was another person after me who was ready to come far from Rome to Milan and pay 400€ for BEI as that person knows how often this breeder has won the Yorkie Terrier Exhibition competitions.

But she kept the promise to me as she was being professional. Even I was also lucky that I didn’t have to come to her house to take BEI and instead, she brought him herself to my house, considering that her city and my city are only 10-15 minutes with car. For me it was lucky, but I think it was also because she cares for her dogs and wanted to see the living environment BEI was moving into.

It wasn’t that being purebred is the requirement that values the most to me (what’s important is that the dog has fur – not too short – and small size so I could bring him easily anywhere). I had been trying to contact so many dog shelters before to try adopting as they said it was better since it helps abandoned dogs. However, maybe it wasn’t my luck to adopt any as all of the shelters that I sent message to, require 200€ contribution for adult dogs from a year old plus around 80€ train fee to transport the dogs (So it’s almost 300€ -_-). The dogs they have will come from Serbia and Spain.

Well, I understand that they need money to continue operating the shelters. But I personally prefer to pay less and save the money for the dog I would adopt in the house, to give him the best I could. So at the end, I continued searching and found BEI instead, what a fate eh…

I really feel lucky as this is my first dog, meaning I had no experience at all to train any dog to behave well.  Coming from this breeder, BEI behaves so well as she trains her dogs perfectly. Many assume that Yorkies bark a lot, but that’s not an issue at all with BEI. He does bark, but only sometimes, when it’s really needed (Ehm, and maybe when he’s sleeping and dreaming) :-p

And another good thing is that it’s as if I had both dog and cat completely. How? To tell you honestly, BEI acts like a cat in the house while he moves actively like a dog outside, meaning he doesn’t disturb me when I’m doing my things in the house and he just mostly sleeps all the time.

Day by day pass, I just love him more and more, feeling lucky that I could have him around the house. He makes me happy and he does make me relax too whenever I feel tired or sad. I just wish I could give him the best life he could have as my baby dog and keep him healthy plus have long life, until 20 years if he could, like some Yorkies could have. And so that’s the brief story of how I met BEI, I wouldn’t bore you with longer details 😀

This site uses Akismet to reduce spam. Learn how your comment data is processed.